The Saimaa ringed seal (Pusa hispida saimensis) is one of the rarest seals in the world. There are only about 400 of them in the world and the whole population lives in the Saimaa region. LIFE Saimaa Seal was a project funded by the EU which approached the protection of Saimaa ringed seals from a variety of different angles and sought solutions through the joint efforts of many partners.

The project was coordinated by Metsähallitus. The partners were South Savo Regional Centre for Economic Development, Transport and the Environment, University of Eastern Finland, Natural Resources Institute, Finnish Association for Nature Conservation, WWF Finland, Finnish Federation for Recreational Fishing, and University of Turku. The project budget was 5.26 million euros, with EU funding accounting for 3.95 million euros of this sum. Part of the funding was provided by the Ministry of the Environment, the Raija and Ossi Tuuliainen Foundation, and the Nestori Foundation.

The Layman’s report describes what was done in the project LIFE Saimaa Seal and how the joint efforts during the five-year project affected the life of the endangered Saimaa ringed seal and its living conditions. The project actions are presented as part of the annual cycle of the Saimaa ringed seal’s life. Terttu, a female seal born in Lake Haukivesi in 2008, makes observations from the perspective of a Saimaa ringed seal. 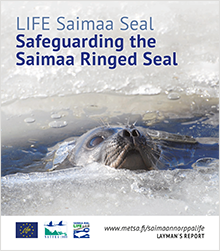