The first year of Metsähallitus under the new act on Metsähallitus was a successful one. The performance target was exceeded and the other goals set for Metsähallitus were also achieved. The year 2017 also marked the centenary of Finland's independence and a large number of events was held to celebrate the anniversary.

The operating result of Metsähallitus Forestry Ltd, which is responsible for the main business of Metsähallitus, was exceptionally good. The company's turnover was EUR 296.7 million and the operating profit was EUR 26.5 million. Biodiversity was promoted in state-owned multiple-use forests by investing EUR 37 million in accordance with general social obligations.

The result for Metsähallitus Property Development in 2017 was EUR 16.5 million. The impact of the growth in tourism was reflected in higher demand for plots. As anticipated, 2017 was a year of building in wind power, with two new wind farms opening on state-owned land.

The effectiveness of Metsähallitus' public administration unit, Parks & Wildlife Finland, showed improvement on multiple indicators. Visitors to national parks brought EUR 258 million to areas adjacent to protected, hiking and cultural heritage areas included in the calculations. This is 11 %more than in 2016. Fishing and hunting visitors also had a significant impact on the regional economy. The total income and employment impact of wilderness visitors totalled nearly EUR 43 million and 261 person-years. 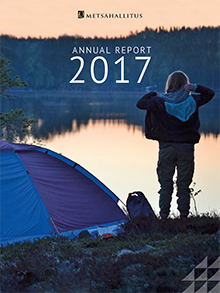